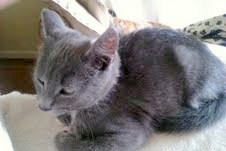 Whisper the Kitten is hardly ever in his pen.  From early morning to bedtime he is free to explore the house and back garden, and to socialise with the other animals.  He is learning when he can play with the other cats and when to ignore them, when he can jump on a passing dog’s tail and when he should not. 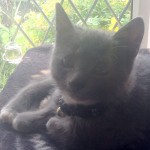 Last night, at bedtime, I called him, rattling his biscuit box (that usually works).  Nothing!  We searched the house in case he had got shut in another room, then we put the dogs in the dog room and I went into the back garden calling and rattling as I went.  In a few minutes I heard a familiar meow and traced the sound to the side garden, behind a fence to keep the dogs contained.  With a little encouragement Whisper succeeded in climbing half way up the fence so I could reach over and take hold of him.  A few cuddles later he was fine again.

I thing what may have happened was, he jumped from the back doorstep onto our new gate and having jumped down, found himself in the front garden and found it impossible to return.  He found his way to the sound of my voice (bless!) and the rattle of the biscuits.