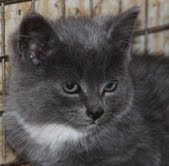 Yesterday, we made the trip to Farplace at Weardale to pick up our new kitten whom we have named Whisper.  His mother was shot, possibly by a game-keeper perceiving her to be a threat to his game birds.  She presumably wasn’t killed outright as she was found in a barn, by the owners of the barn, dead.  They realised she had milk, and set about finding her kittens which were then taken to Farplace. There were 3 of them, Whisper, Charlie and Midnight. 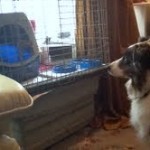 Whisper has made the trip home and is meeting our pack from the safety of a pen.  I bought some moist kitten food for him, but he seems to like Burns Kitten food just fine.  He is now wearing a smart kitten collar with a bell, for the times he is out of his pen, just so we know where he is.  He is still a bit wild at the moment, as you might expect from the kitten of a feral mother, but he allows me to pick him up and stroke him without any problem and has never attempted to bite or scratch me.  He will become a furry purry given time and patience.  He is young enough to adapt.