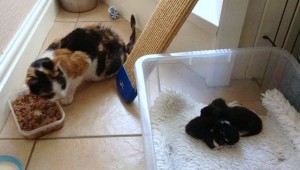 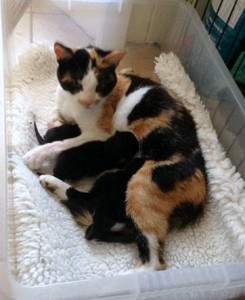 Wendy came in on 6th August. Her kittens were just 24 hours old. She had presumably been dumped, as she was not known in the area she had been found. She had given birth in a Wendy House in the next garden to her rescuer. She came in extremely thin, and VERY hungry. At first she was disinterested in her kittens. She did not want to go in to them and was not bothered about us handling them. Very quickly she became more secure, realising that we were helping her and started growling when anyone came near, protecting her little ones. Due to her inexperience we feel that she is a first-time mum, and fortunately this will be her last litter! Her three tiny kittens are black and white and will be ready for new homes at the end of September.