Two sides to every story

Following our article on Melvin we have been asked to print another side to the story by the owners of the little dog he attacked.
Some people may find some of the pictures distressing: 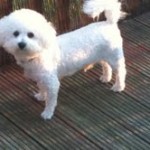 On the 22nd November 2011, Flump was in our garden helping my wife wash the car. The garden is secured by a high fence all round with gates (which were closed at the time). He was happy following my wife round the car minding his own business, when Melvin jumped over two high fences and savagely attacked him. Melvin grabbed Flump by his neck and ear and was tossing him around like a rag doll. My wife screamed at Melvin to release Flump (a scream I will never forget) and tried with a brush to get him to release his jaws from around Flump.

I came rushing out to be confronted by this horrific sight of Melvin killing Flump, by which time Melvins foster carer was also trying to help save Flump to no avail. I approached Melvin and as soon as he saw me he started running towards the back of the shed to finish Flump off. I managed to grab Melvin by his collar and with great difficulty, after being pulled all over the garden, bring him back onto the lawn. ivermectin for snakes By this time Flump didn’t have much time to live (his head was floppy and his tongue was hanging out and his eyes were rolling. By this time there were three of us trying to get Flump from his jaws. 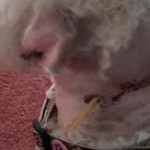 Flump - stitches in ear and drain in neck

We did everything possible in our power to stop the attack, but unfortunately the only way was to stab Melvin, to force him to release Flump. When Flump was released I gave his foster carer a towel to press on the wound to stem the bleeding on Melvins wound. Her mum was called from work to deal with Melvin. He was only stabbed the once and was not brutally murdered as insinuated. We think anyone in our situation would have done the same as it was our last hope to save Flump.  Melvins foster carer even said “you did what you had to do”.

If Melvin had been let out on a lead or muzzled, this incident would not have happened. ivermectin injectable bottle picture
Flump was very badly injured.  He had puncture wounds to the back of his neck and parts of his left ear are missing. His treatment consisted of one night in Abbey House Veterinary Hospital to have his ear stitched together and to have his neck cleaned out.  A penrose drain was placed in the back of his neck along with five stiches in his dorsal and put on an iv drip. He was very badly bruised and sore and on pain killers. 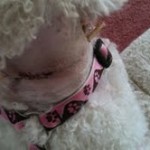 Four days after the attack Flump was no better and still in a lot of pain and had to be taken to New Priory Veterinary Hospital, where he was kept in overnight, being given Morphine and fluids through a drip.

The vet bills so far have reached £801.19,and vets appointments are ongoing.
So all you people who are reading about “Poor Melvin”, Please DO NOT JUDGE US until you have read our side of events. ivermectin dose goats
We would like to add that the Police are not investigating and never have been as stated on the YRDR website, as they told us that we were within our rights and the law to save our dog (Bichon Frise) from a dog that was allowed to roam.
…  J and J
(Full details supplied)
Logging In...