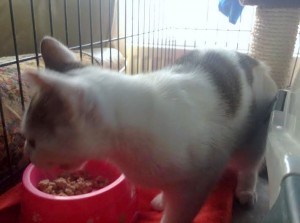 Topsy is a pretty tabby and white kitten who had a hard start in life. She was left on the streets to fend for herself from a very early age. She survived and was taken in by a kind couple who put posters up to try and find her owner, who did not come forward. 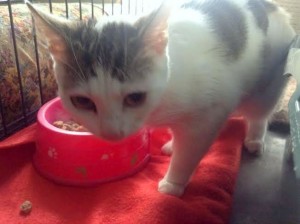 We found that she has no claws on either front or back feet. As the cruel practice of declawing is illegal in the UK, we can only assume she got caught on something and as she escaped, her claws were ripped out. Fortunately they now appear to be growing back again. Without her claws she cannot climb and is unable to defend herself which makes her very nervous around other animals. She enjoys strokes and loves human companionship.

At around 6 months old, Topsy is now de’flead, wormed and neutered.