My sister’s dog Toby is a very placid dog who adores her and would go everywhere with her.  He behaves well around other dogs and has never been aggressive.  On a walk yesterday he was attacked by another dog.  Here’s what Janet says: 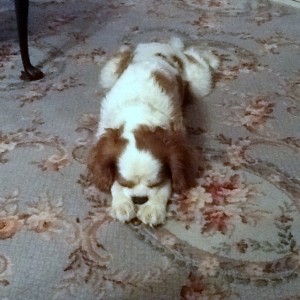 Toby got attacked this afternoon by a rescue dog being taken out by a volunteer dog walker who had her off the lead. Toby was sniffing a blade of grass when she came from a parallel path & bit him in the side. Fortunately he was wearing a coat which might have protected him to some extent, but he was very frightened.
The dog walker was very apologetic & gave me his phone number so I could ring him & give him an update.

However, I do feel that rescue dogs can be very unpredictable and should maybe be kept on a retractable lead at all times. In this way, they can exercise with the walker retaining some control.