Tiffany’s Trip to the Vet 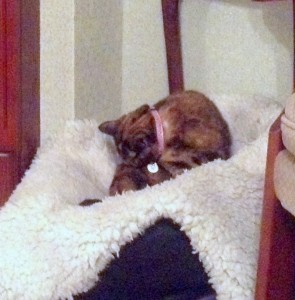 Tiffany, our latest rescued cat went to visit Andrew the vet yesterday.  She has a patch of slightly thinning fur just above her tail, which was indicative of fleas (although I hadn’t seen any) – also I had sprayed all my cats and dogs with Frontline only yesterday morning, so that was covered, but Andrew gave her a shot of anti-inflammatory to stop her licking the area.  I have to smile when a vet says he is going to “give” something – it always has a price tag!

She had also vomited into her litter tray that morning (Good Girl!)  The sickness, Andrew said, was possibly caused by a fur ball, so we are now adding fish oil or olive oil to their dinners.  Then Andrew checked her ears. There was a build up of wax, nothing more, so again Olive Oil is a good standby here too.  Andrew suggested using aired water half an hour after to help get rid of the oil.  Then he trimmed her nails as she won’t go out and doesn’t use the scratching post / activity centre.