The Morals of an Alley Cat! 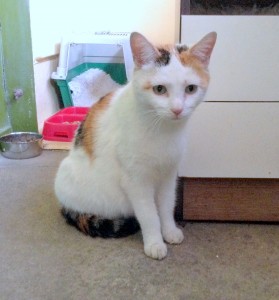 I was speaking to a guy the other day who has 2 adult cats, mother and son, and a litter of kittens.

He was convinced that the kittens were fathered by a local stray, and definitely not by his male cat, who was not neutered.

Actually the kittens could all have different fathers, including their half brother!

Females will mate with every male cat in the neighbourhood, risking injury and diseases, some of which are fatal.

One of my ex works colleagues planned to allow her female cat outside when she was in season so she could have a litter of kittens. 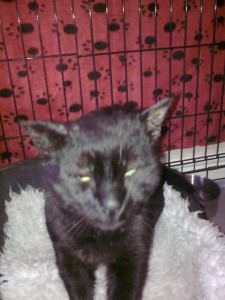 She looked at me like I was from another planet when I explained the risks – I may also have implied that she was irresponsible for even thinking this but it is the truth!

Cats have no sense of morality “the morals of an alley cat” is a true phrase.

They fight for the right to mate and can have many battle scars, as did poor Sooty on arrival, although he was a neutered male, who had got caught up in turf wars after he had been kicked out from his home.

He had been living rough for some time before he came to us.

He had multiple abscesses on his head and neck, which burst.

He was a mess but thanks to the good care of Andrew, our vet, he survived and eventually went on to find a good home, thanks to Jan at Farplace Animal Rescue in Weardale.