Spider in the Puppy Pen 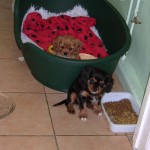 Today whilst doing an early-morning clean in the Puppy Pen, I found a spider!  Now I’m not the hysterical type when it comes to spiders, so I just worked around it.  The puppies weren’t bothered either, but it reminded me of a true story which happened when we had the kennels at Dewsbury. 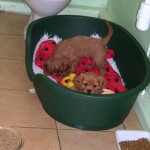 We regularly has a small group of dog-crazy children who came to help in the pens on Saturday mornings.  On one such morning, after cleaning duties, the girls were allowed to go in with a litter of young puppies, who were about 6 to 8 weeks old.

It was a good way of socialising the pups and teaching the kids how to handle young animals – however …  there was a spider …  the girls screamed, the puppies screamed and the girls exited the pen even quicker than they had entered. 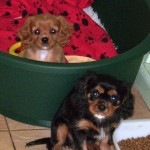 I immediately told them to stop as they were frightening the puppies, and explained that the spider was not going to harm the puppies and it was far smaller than them so it really wasn’t a threat to them either!

Another slightly older girl, who was somewhat more sensible than the youngsters, came up from the kennels and said that it didn’t matter if the spider had tattoos on all its’ legs, and a criminal record, that was no reason for them to scream.  At that point everyone fell about laughing and the incident with the spider was less frightening.