Bella was pregnant by Drummer and expecting puppies around 17th June. 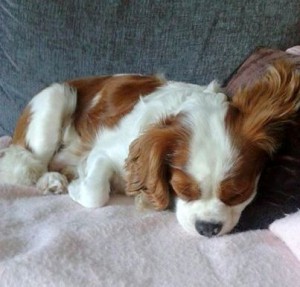 Bella was in the early stages of labour for a couple of days, without progressing. She was taken to the vet for a checkup. He said he could feel something inside her but would not speculate beyond that. He suggested we wait a few more days. Sadly, despite another visit to the vet, the one large puppy Bella was carrying died before it could be born as she was insufficiently dilated to deliver it. The vet removed the puppy, a tricolour who had been dead a few days, and stuffed Bella full of antibiotics, anti inflammatories, painkillers and oxytosin to remove any further remains. She has another vet visit scheduled for today but Bella is expected to make a good recovery.

The vet could not speculate as to why this happened or if it would be likely to happen again. It is something I had never come across before, so again, I have no explanation. The bitch will normally dilate before puppies are born.  It has been a distressing week for all concerned but despite all our best efforts this was not to be. I have suggested to Bella’s owner that she waits a few months before deciding whether or not to repeat the mating, which would not happen until a year has elapsed to give her body time to recover. Also the vet suggested that an elective caesarian if there was to be a next time, would be more likely to be successful.