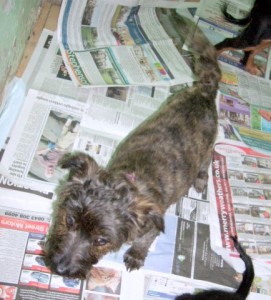 Pregnant bitches coming into rescue may have been a loved pet once upon a time, but often, when owners realise that their bitch is actually pregnant and not just “putting on weight” they feel that they cannot cope with the situation.  The more responsible owners, if they really cannot cope, will sign their animal to a rescue who have the facilities to care for her and her puppies, but all too often, less responsible owners will simply hand the animal over to the dog warden as a “stray” or dump their dog and drive away.  Pregnancy in a dog normally lasts around nine weeks.  Puppies are carried high up under the ribs during the first stages of pregnancy and the first obvious sign is that the rib-cage is sprung outwards.  At around 5 weeks, her nipples will become erect and pink.  In the last couple of weeks her puppies will drop down into her belly giving the “football tummy” look.  Her milk should come in anytime in the last week.

Do’s and Don’ts for Pregnant Bitches

Do Not Vaccinate – this can harm the unborn puppies.  Quarantine  the bitch away from un-vaccinated dogs and vaccinate her at the same time as her puppies – ie when her puppies are 8 weeks old.

Worming during pregnancy should be done using Panacur at half the recommended dose for at least 3 days, or until the birth of the puppies.  Do not use any other product as these may not be licensed for use on pregnant bitches.  If in doubt consult a vet.  She can then be wormed at intervals when her puppies are wormed at 4, 6 and 8 weeks, using Panacur for the mother and Panacur paste for the puppies according to instructions on the pack.

Do not place her with larger male dogs.  The scent of her hormones can be the signal for them to mate her – whether the dogs are neutered or not – smaller males she can probably deal with, but larger males could damage her or her puppies.

Do not assume she will be able to have her puppies naturally or unattended.  You cannot tell what dog what kind, or size, of dog mated her, and if she is a small bitch and there is a large puppy in there, she may not be able to pass the puppy naturally. 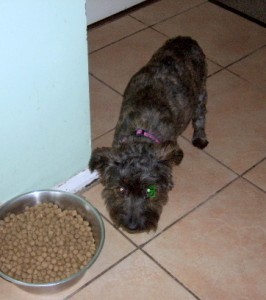 I usually suggest that owners do not substantially increase the amount of food fed to the mum-to-be during pregnancy as this can produce extra large puppies which may make the birthing process difficult and could result in an expensive C-section.

However, if the bitch is emaciated, or very underweight.  ie her spine can be clearly felt, give her a complete high quality food – a puppy food would be best if she can tolerate the higher protein levels but if this upsets her stomach go for a good adult food without colourings and flavourings.

Feed several smaller meals a day rather than 1 large meal

Signs to look out for are:

Whelping will often occur overnight as this is the safest time to give birth in the wild, with fewer predators around.  Bitches should not be left alone at this time in case they get into difficulties.  If the bitch needs to go outside to relieve herself, take her on the lead (a torch and a towel may also be useful) as she may not realise that a puppy is on the way.  I have had several puppies born outside over the years, under similar circumstances. 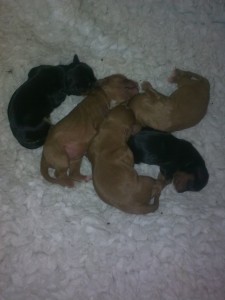 Each puppy should arrive in its’ own fluid-filled sack which you should tear open at the puppy’s head, and clear the fluid away from puppy’s nose and mouth and ensure that puppy is breathing.

The puppy can then be given to the mother to clean and feed – you may need to attach the puppy to a nipple until they get the hang of it!  The action of the puppy suckling will help to stimulate the next contractions.

There should be an after-birth following each puppy born.  The bitch may be allowed to eat a couple of afterbirths as they have high protein value.

Between births, and when the next contractions start, the puppies can be placed in a warm box and covered lightly.  They can then be placed back with the mother and their new sibling.

The bitch may rest part way through the whelping – do not assume she has finished, until she settles down with her new family and is blissfully content.  The bitch and her litter should be checked over by a vet as soon after the whelping as practicable, but definitely within 12 hours.  Tell the vet if you think she may have retained an after-birth.

After the whelping, the bitch should be fed as follows:

Following her delivery, she may need tempting to eat and may even need to be hand-fed with some tasty morsels to give her some strength to feed her babies.  Give her 1 meal for her, plus 1 extra meal for every 2 puppies in the litter, so:

Split this between several meals.  As any mother who has breast-fed will know, she will need plenty to drink too, but not cow’s milk.  Try to give her a good complete puppy food as this is higher in protein. Cheese is a good source of extra protein and calcium or Canavel calcium supplement can be used.  If she has insufficient milk or is emaciated, or if she has a very large litter, you will have to supplement the puppies with a proprietary puppy milk.  I have always got good results by using a baby’s feeding bottle with a slow flow or premature baby teat.  Feed the larger puppies through the day, allowing the smaller ones to feed from the mother, and return the puppies to her for night feeds.

She may have black, sticky diarrhoea after the birth, particularly if she has eaten afterbirths, and this is normal for a few days.  Reducing the protein in her food slightly may help.