Well … Olive wanted to let her mum, sister and uncle Fin know what she did at uni. 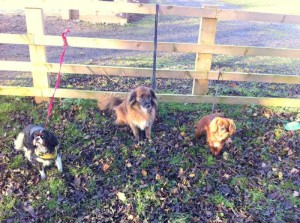 We went for five days to take part in the practical side of my Canine behaviour and training course.  Olive met lots of other dogs all sorts of breeds and she met lots of new friends too.

Her best friends were a collie x who was 9 years old and the owner had got her from a recue centre that she works at and the other best friend Olive made was another cavalier called Dusty.

Dusty had come all the way from Dublin so she and her owner had had a long trip.  Dusty was about 5 years old a lovely cavalier considering she had been used as a breeding bitch in an awful puppy farm in Dublin. When her owner rescued her she would not even come out of her cage for 2 weeks as she had never been in a house or known kind people before. but now what a change.  Dusty and her owner have such a great bond and she can do all sorts of tricks and enters in agility competitions too.

Olive was watching Dusty have a go at the agility and so she decided to have a go and she was fantastic!  She did everything and was not scared of anything.  So looks like we will be doing more training and so competitions when she is old enough!

We also did some more clicker training this time we continued with the sitting in the box but then turned the box over so she sat on the box and sent her away to sit on it from a great distance, we also tapped logs and using two front paws put them on a pole on the ground and walked along it.  She then progressed to sending her into a set out circle and she learned to lie down in the circle where ever it was placed.

All of this in just 3 days of practical training sessions, not bad for a cavalier!!  She actually is a very clever little dog.

I have said I will bring the clicker down to try on Skully but the way things are looking, sorry Anne, but I think Olive got the brain cell in this litter, but we will try!