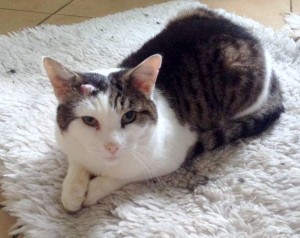 We have been revamping the larger dog pen to make it cat proof.  This is due to the fact that there are scuffles with un-neutered tom cats who are unwittingly attracted by the un-neutered female cats next door being on call.  This has resulted in a nasty head wound for poor Cookie which needed draining under anaesthetic at our vets, along with the resulting vets bill. 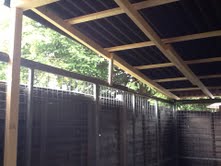 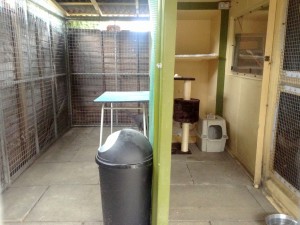 It took us six hours of hard graft to make the new cat pen safe and move in the pen furniture, bedding etc to make it a pen which any cat would be proud of. So now, Cookie, Biscuit, Felix and Whisper will be living safely out their new pen. There is a cosy indoor area which can be closed off when the nights get cold, and a large outside area which is fully roofed, thanks to our friends Therese and her husband Wayne, who came over from America last year.

I can’t say it was an overwhelming success as far as the cats are concerned.  They immediately started to look for a way out, all except for little Whisper who was more interested in playing ping pong. They soon settled down though, with Whisper and Cookie on the top shelf and Felix and Biscuit on the bottom shelf!