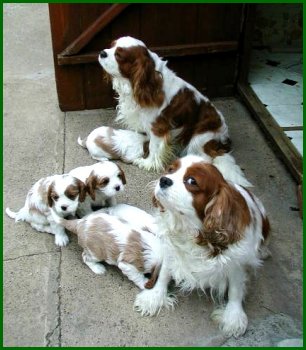 I remember that Carys once had a litter just before Bonfire night.

At that time my Maternity pen was outside.  I requested that my neighbours set off their fireworks at the end of the garden to minimise stress to Carys and her puppies.

They did not!!!  Their fireworks were set off just behind the puppies’ pen.  It sounded like a war zone.

I went out to Carys to reassure her and to bring her and the pups in if necessary.  She was not happy about the noise but refused to leave her babies, whose ears, fortunately were not open, although no doubt they could feel the vibrations.  In the event, we did not move Carys and her babies.  I remained with her until the worst of the fireworks had finished.

There was the usual post-bonfire fireworks, by which time the puppies were old enough to venture outside.  I clearly remember them sitting in the doorway to their pen, watching the fireworks, as though they were thinking

I certainly do not advocate unnecessary exposure of pets to fireworks, Carys was the exception, but the puppies grew up to be bomb-proof!