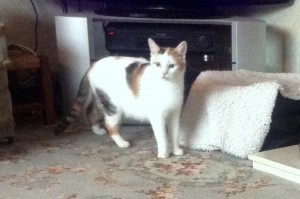 Cat overpopulation and the dumping of unwanted litters of kittens is an all-too-common side effect of irresponsible pet ownership. Every year, thousands of unwanted kittens and older cats are dumped on the street – ultimately end up dying from starvation, predation or transmissible feline diseases or finding their way into pounds and shelters that may or may not be able to find homes for them. Many of these animals do not ever get adopted from the pounds and shelters that take them in and most end up being put to sleep. This sad waste of healthy life can be reduced by not letting pet cats breed indiscriminately and the best way of preventing any accidental, unwanted breeding from occurring is through the routine neutering of all cats except those owned by reputable breeders. The deliberate breeding of family pets should never be considered an easy way to make a money. A lot of cost and effort and expertise goes into producing a quality litter of kittens for profitable sale. And that’s only if nothing goes wrong! If your queen needs a caesarean section at one in the morning or develops a severe infection after queening (e.g. pyrometra or mastitis), then all of your much planned profits will rapidly turn into financial losses (the vet fees for these kinds of treatments are high). On top of that, if you fail to do your homework and you breed poor quality kittens or poorly socialized kitties that won’t sell, then you’ve just condemned some of those young animals to a miserable life of being dumped in shelters or on the streets. 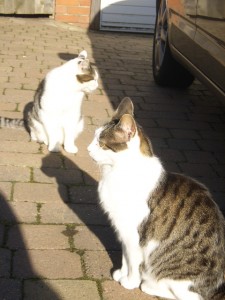 By having companion cats spayed at a young age, they are unable to become pregnant. This results in fewer litters of unwanted kittens being born which, in return, benefits not just those unwanted kittens (dumped or shelter-surrendered kittens can often lead a tough, neglected life), but also society and the environment in general. A proportion of the unwanted kittens that are dumped into the environment do survive and grow up to become feral cats, which in turn reproduce to produce more feral cats. Feral and stray cat populations pose a significant risk of predation to native wildlife. They carry diseases that may affect humans (e.g. rabies, worms) and their pets (e.g. rabies, FIV, FIA, FeLV, parasites), they fight with domestic pets inflicting nasty wounds and abscesses; they steal the food of domestic pets and they place a huge financial and emotional burden on the pounds, shelters and animal rescue groups which have to deal with them. 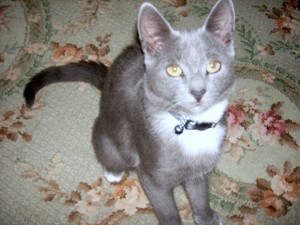 Cat breeding is not merely the production of kittens, it is the transferral of genes and genetic traits from one generation to the next in a breed population. Pet owners and breeders should spay female cats that have conformational, colouring and temperamental traits,which are unfavourable or faulty to the breed as a whole, to reduce the spread of these defects further down the generations. Female cats with heritable genetic diseases and congenital defects/deformities should also be spayed to reduce the spread of these genetic diseases to their offspring. 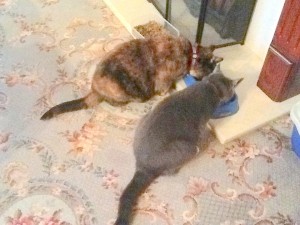 Early spaying prevents female cats from contracting a range of ovarian and uterine diseases and disorders. Desexing removes the main source of oestrogen and progesterone from the animal’s body (the ovaries), which not only prevents the onset of these diseases or conditions, but can even help to control or manage these diseases if they are already present. The ovaries are responsible for producing estrogen and progesterone: the hormones that make female animals look and act like female animals. It is the ovaries that make female cats exhibit the kinds of “female” hormone-dependent behaviours normally attributed to the entire animal. Entire female cats are more likely to exhibit sexual behaviours including: calling for males, aroused interest males of their own species; nymphomania(excessive sexual and mating drive) and excessive affection for their owners (in-heat cats often drive their owners nuts by constantly putting their bottoms in their owners’ faces and yowling at and rubbing up against them). In-heat queens calling for mates can often seem to be ‘in so much pain’ (they are extremely restless, they wail, they roll around on their sides and backs …) that inexperienced owners will sometimes think they are sick or injured! 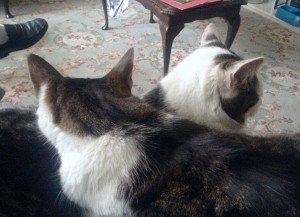 Cats coming into season can also be moody and unpredictable (PMS?) and they may bite and scratch owners and other household pets who get too close to them or touch them on the rump. Some of the more dominant cycling females will even display unwanted dominance and territorial behaviours such the marking of territory with urine (although much more commonly exhibited by entire tomcats, some dominant females will also exhibit urine spraying in the house). Additionally, entire, in-heat female cats are more likely than neutered animals are to leave their yards and roam the countryside looking for males and trouble. Roaming is a troublesome habit because it puts other animals (wildlife and other pets) and humans at risk of harm from your feline pet and it puts the roaming pet at risk from all manner of dangers including: predation by other animals, attacks by other cats, cruelty by humans, poisoning and motor vehicle strikes. The spaying of entire female cats may help to reduce some of these problematic hormone-mediated behaviours. Fighting between cats is more common when cats are left entire. Although fighting is much more common between entire male cats, fighting can also occur between male and female cats when a male attempts to mate with a female who is not yet receptive to his advances. This can result in the female cat attacking the male and receiving wounds in return. Owners of fighting cats often spend large amounts of money treating their pets for fight wounds and cat-fight abscesses. Animals that fight are also more likely to contract the deadly feline AIDS virus (FIV – feline immunodeficiency virus), which is predominantly spread between cats through warring activities (biting and scratching). By reducing their attractiveness to tomcats, spaying reduces the incidence of fighting and its secondary complications (clawed and lacerated eyes, cat-fight abscesses, FIV-spread and so on) 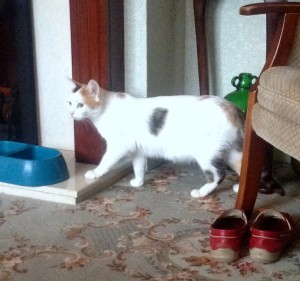 When a female cat comes into heat, she releases pheromones and hormones in her urine that notify male cats of her increased fertility. At the peak of her cycle, she will also call and wail, notifying males of her desire to mate. For these reasons, tom cats constantly come into their yard at all times of the day and night. Wandering toms will fight amongst themselves and wail back to the female from outside, thereby producing a lot of disturbance in the middle of the night. The toms will fight with the house owner’s cats, resulting in costly cat fight abscesses and the spread of diseases. Toms will spray urine and faeces in the female-cat owner’s yard, which kills the plants and grass and leaves behind a pungent and noxious odour. Sometimes, the tomcats will even venture into the female-cat owner’s house (they certainly will if there is a cat flap), where they will steal food and mate with the in-heat female in question. If the female cat does escape the house, she is almost certain to be mated and to fall pregnant.

By neutering all of the cats in your household, the above problems will be solved.