Mating and Pregnancy in Dogs 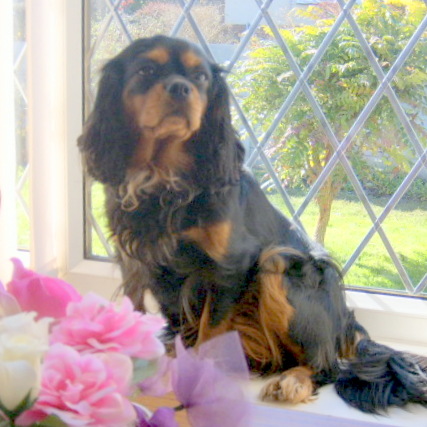 Pregnancy in a dog normally lasts around nine weeks – a few days less for cavaliers, as a rule. 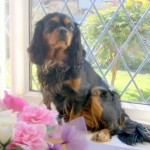 The whole process starts with mating – which usually takes place on day 11 to 14 of the bitch’s season.  This, however, is not always the case – dogs haven’t read the Manual!  I had one bitch who would only mate on day 5 and another who would mate anytime between day 7 and day 17! Two matings are usually offered on alternate days, and if pregnancy does not result then a “free of charge” mating is available to the same bitch next season. Usually the bitch travels to the stud dog’s home where the mating takes place, under close supervision to ensure neither of the dogs are hurt.

Very often, the bitch will come out of season quite quickly after a successful mating – indeed if the bitch is pregnant to the first mating, the stud dog may not mate her a second time. I have had a client who left in a bit of a huff after an unsuccessful 2nd mating – only to inform me eight and a half weeks later that her bitch had 6 beautiful puppies. 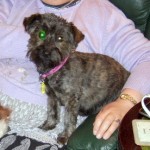 I usually suggest that owners do not substantially increase the amount of food fed to the mum-to-be during pregnancy “Eating for 2, 3, or more” is not necessarily a good idea, and can produce extra large puppies which may make the birthing process difficult and could result in an expensive C-section.  Better to have slightly smaller puppies, and then get loads of goodies – high in calcium and protein – to tempt your bitch to eat – this is the only time I hand-feed a  healthy dog.

1 meal for her, plus 1 extra meal for every 2 puppies in the litter.  So for a litter of 4, she would get 3 times her normal daily food intake,  or for 8 puppies, she needs 5 times her daily rations, split between several meals.  She will need plenty to drink too, including a good milk substitute eg Lactol.