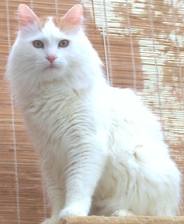 We used to breed Pedigree Turkish Van (Swimming cats) some years ago, before we moved to Batley, and one of our remaining Turks – a neutered female called Taz moved with us.  She was striking to look at, thick pure white fur with cream ears and a cream and white ringed tail, and a distinctive lion’s mane which Turks develope as adults.  She was not your average Furry Purry, being only 4 generations from wild, she could be quite a handful.  So when she had sore ears, I asked the vet to sedate (anaesthetise) her for safety’s sake, flush out her ears and put antibiotic cream in.  This treatment had to be repeated 10 days later.  We took her home for the second time and the following morning she went out as usual with the other cats.  This would be about 4 or 5 years ago.  She never came home.

Search though we might, we never found her – that is until today.  I spotted her sitting on the wall of her new (adopted) home – nearly a mile down the main road near to where we now live.  There is no doubt in my mind that this was her.  This cat is a relative rarity and the chances of there being two in the same locality is remote to say the least.

Obviously Taz had decided enough was enough and had moved home!  I am delighted I spotted her and that she was looking well cared for.  I won’t be asking for her back – she has made her choice and that’s fair enough with me!