We are rapidly approaching the Holiday Season again, so some timely advice on Dogs in Cars may be appropriate. 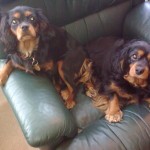 When travelling with your family pet, please use either a secure crate or a harness to restrain him.  If the door is opened at a break in the journey, the excited dog will, in all probability, rush outside, which may not be safe for him.  No matter how well behaved your pet normally is, journeys are exciting and the potential for danger is just around the corner.

God Forbid there is an accident, but the car door could burst open and in a panic your dog could escape and be lost or injured.

Following an accident on a local motorway a few years ago, a family’s cat escaped from the wreckage and ran off in nearby fields.  It had been in a cat carrier, but the impact had burst it open.

Following a period in hospital, the owners contacted friends of mine in cat rescue and they helped the owners to search for their beloved pet.  It was found, a week later hiding under a pile of logs in the corner of the field, safe but hungry and scared.

Also, don’t travel with the window rolled fully down – again I have known of dogs who have leapt through an open window when the car slows down eg. at a roundabout.

Always take plenty of water, and a bowl for your dog.  This can be a life-saver for an over-heated pet, either as a drink or to pour over him to cool him down. 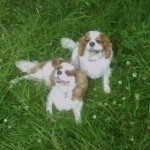 And finally DO NOT LEAVE DOGS IN LOCKED CARS.  I remember an incident when I was a small child when we were walking from the beach back to our lodgings after a lovely day out.  A distraught family were desperately trying to revive a pet dog by rolling him in the grass.  Apparently they had left him in the car with the windows cracked open, in a shady place, in the morning. It was now tea-time, the sun had moved round and he was dead.  If you are in any doubt as to how long it is safe to leave a dog in a car, then I suggest you try sitting in a car, in sunshine, with the windows barely open.  A few minutes is the very most I can stand .

If you can’t take your dog to your favourite beach (which is the case on a lot of British beaches in summer months), either leave him at home with someone to walk him, ask Kate at Step in to call in and walk him (Yorks area – details on the right hand side of this page), or put him in kennels for the day.  Okay it adds to the cost of your day out, but is far kinder to the dog than being slowly cooked in a hot car.