Heronbank Urbanhaze aka Sox has settled into his new home 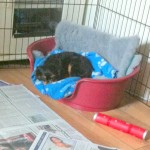 Sox has got his own little basket in his pen and after a few hours hard play he’s settled down for some well earned rest.

Rufus doesn’t quite know what to make of Sox yet – I’m really surprised but he’s slightly wary of Sox at the moment, whereas Sox is not wary in the slightest thought it would be the other way round!    But anyway I think the DAP spray is helping them both though!

So right now Sox is curled up in his basket asleep and Rufus is curled up asleep on the sofa next to Jo – out of reach of little paws.

We’re putting them together for little spells and I’m sure after a while they’ll both get gradually used to each other.

Sox seems to have taken it in his little puppy stride!

Thanks again for doing such a great job of bringing him up.