Have you ever seen a cat with thumbs? 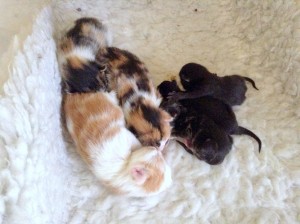 Have you ever seen a cat with thumbs? The mother to Fleurs adopted babies is polydactyl and one of her remaining 2 babies also has an extra digit on each foot.

Polydactyl cats are have a genetic mutation which causes extra toes to form. Typically, cats have five toes on the front (including a dew claw) and four at the back. Polydactyl cats can have up to seven toes on each paw. The extra toes can appear on any paw and in any combination, sometimes in a way that mimics an opposable thumb. Every polydactyl cat is different. Some polydactyls are not impaired by their extraneous digits, but some cats can suffer infections, pain, and mobility problems.

This can show itself in two ways. The first is the “mitten paw,”. The toes are grouped together on the inner sides of the paw. Some cats learn to curl the extra portion of their paw into a rudimentary thumb and attempt to grab things, and they can even open doorknobs! The other type of polydactyl mutation in cats causes them to sprout toes all around the paw’s perimeter. This can be troublesome, especially if the toes are pointing backwards. It can be severe enough to require amputation due to the inability of the cat to walk comfortably.

Unfortunately, these cats are subject to a few issues. For example, a double nail can form on a paw, between the normal paw and the extraneous digits. Two nails can grow from the same cuticle, which can look like a set of ram’s horns. They can also have a normal claw covered by a deformed claw, like a sheath. The claws on the extra toes do not retract fully and this can result in them getting caught in things because they stick out to the side.  Cutting the claws completely can solve that problem. Trimming a cat’s nails is part of good cat hygiene.. If you have a polydactyl cat with abnormal nails, it is an especially good idea to trim them. The claws on the extra toes often do not retract and can be pointing in an inconvenient position for walking. Trimming them reduces the danger of the nail curving under and damaging the paw – often the way the claw is pointing prevents your cat from scratching to maintain the health of their claws. The inability to do so can cause the nail to curve under itself and potentially cause infection.

At the end of the day, polydactyl cats often have problems and should not be used for breeding in my opinion.