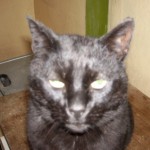 We have groomed Sooty before, so in fairness we knew what we were letting ourselves in for – see previous item.  This time, we got 2 ACP sedatives for him instead of the 1 1/2 we gave him last time – he has put some weight on since last time – and we hoped it would put him under deeper sedation than last time.  Half an hour after he had taken the 2 ACP’s in food, he seemed to be getting a bit woosy.  “Good“, I thought, “half an hour more and he should be out cold“.

When Katie arrived half an hour later, we went to fetch Sooty from his pen, only to be met by 2 yellow eyes looking at us from the deepest recesses of his bed!  The ACP’s had not done the job as we had hoped! 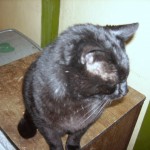 Sooty - in need of grooming again

OK, we didn’t have to bathe him this time, so we took him inside. Taking turns to hold him securely, so as not to get bitten, we set to work grooming out the tufts of fur which had started to form along his spine.  It was not a difficult job, and apart from a bruise from his teeth on one arm, we escaped relatively unharmed.

Whilst we had him inside, we decided to put him some ear drops in, and, as his claws seemed rather long, we clipped the ones on his back feet – no way was he going to let us around the front without attempting to bite us.

We were amazed to notice that not only was he showing no sign of sedation, he could walk in a straight line, and he paused, balancing on 3 legs whilst he washed his paw!!!

The ACP’s had definitely not done the job!!!

Sooty went back out to his pen to sleep it off and will have his dinner as usual tonight, but we’ll not be stroking him for a while after last time!