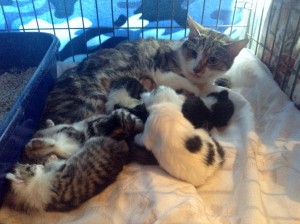 Maisie came to us as a semi feral cat who had given birth to her 5 kittens behind piles of rubbish in a hoarders house. She was traumatized and extremely scared. After a checkup with the vet, and de-fleaing, she spent a few days in our shed to give her chance to calm down. We then brought her inside where we could socialise her and her kittens better. However, she abandoned her kittens one night so we had to crate her and her babies so that they could feed.

I have a friend,Katie who is a behaviorist, and we have been working with Maisie to try and win her confidence. I have the impression that she had been a domestic cat at one time who possibly got left behind when her owners moved house and therefore had to develop feral traits in order to survive.

The first time Katie handled her she was stiff and unresponsive, like a dead cat but alive. She had totally shut down. Katie came the following day and I took the following video comprising 2 clips taken a few minutes apart. In the first clip, Katie is holding her by the scruff to restrain her, and stroking her. In the second clip Katie is rubbing her shoulders and Maisie is not being held. She stayed for a while before jumping back into her crate with her babies.

Here is the video:

The day after this video was taken I was able to feed her some small bits of meat from my fingers, which she took very gently.

We are having her neutered today. We would not normally do this until the kittens are fully weaned but there is limited room in the crate now that the kittens are getting bigger and needing to exercise more. If she is neutered we can let her have the run of the house and learn to trust humans again. Worst case scenario, if she was to go outside, we could leave her food outside and at least she would not be reproducing again.