Fleur has adopted some abandoned kittens 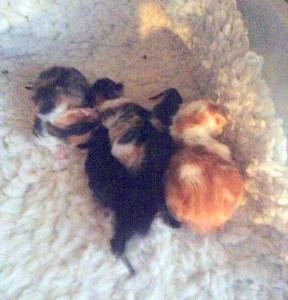 A litter of 4 kittens came to us last night after their mother had rejected them. They were born on Tuesday, so they are only 3 days behind Fleur’s kittens, but they are so very tiny.  We introduced them to Fleur, who accepted them right away and started cleaning them and feeding them. Two were very dehydrated when they came in, and one has passed away overnight. The other doesn’t look good, but is still active, so their best chance lies with Fleur.  Will try and get some better pics later.

Their mother was Polydactyl, which means she has extra toes. The owner thought that by breeding her, she would get more Polydactyl kittens. A polydactyl cat is a cat with a congenital physical abnormality, a genetic mutation that causes the cat to be born with more than the usual number of toes on one or more of its paws. These cats are not as rare as people think.