Fin’s Latest Visit to the Vet 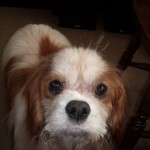 Fin has had numerous veterinary problems, caused mostly by multiple allergies, but this was something different.  He has always favoured his left front leg and this has got worse of late, to the point where he was limping.  A visit to Uncle Andrew at Donaldsons Vets was called for.  An examination confirmed that there was “a lot of crunching” going on, and anti-inflamatories would have been the preferred route.  However, Fin is on steroids, so that was out of the question – Neither Andrew nor I was brave enough to take Fin off steroids, as his many allergies are quite settled at the moment.  He has had an injection which is hoped will lubricate and ease the joint.  One injection a week is prescribed for a minimum of 4 weeks, then we review the situation.  If this works for him, he will be on it for life, but hopefully at longer intervals!