Fin was Very Unwell the Other Day

Fin has many allergies – see http://www.heronbank.co.uk/2011/05/fins-allergy-test-results/ 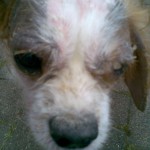 He also doesn’t help himself as he is extremely food oriented and will target all the things he’s not to have.

Well, he followed me into Bubbles room before I could stop him, and Gobble Gobble Gobble, he was in her food dish – which contained minced beef (Beef is one of his many allergies).  I whisked him away but not before he had ingested some of her food.

The following day he broke out in the most horrendous red itchy rash and a large patch of infection had broken out on his back.

Despite his medications he was constantly scratching – was it the food – or was it Bubbles herself that he was allergic to? 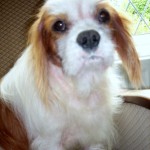 This went on pretty well all day until late afternoon.  By this time, we were convinced he would need euthanasia and rang our vet for a consultation the following morning.  That night I gave him steroids in addition to his normal medications.  I was up at 5am and to my utter amazement he was up with the larks and bright as a button!

We had a good discussion with Andrew, our vet at Donaldson and Partners, and formulated a treatment plan including anti-biotics and steroids, in addition to all his other medications.  Our intention is to wean him off the steroids as soon as he is reasonably better and then see how he goes.