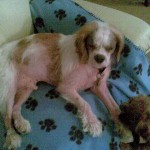 Fin is looking reasonably well at the moment (well, that is compared to how he was when we got him!)

It’s a constant battle against yeast and dust allergies and skin infections. We have managed to eliminate many of the other allergens from his environment eg grass, maize, chicken, beef etc. 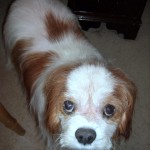 He now has fur growing on his head, his legs and under his chin, which once were bare and although he still is not anywhere near 100% he is more likely to join in with the girls for a game of tag – occasionally!

Can you believe he will be 8 this year!  I can’t believe it either!  There have been several occasions when we thought euthanasia might be his only option, but he’s come through it all.