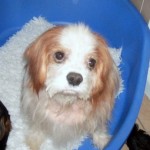 Fin is looking good – about the best I have seen him, but from experience I know that can change in a few hours.  His Bionic Biotics supplement have certainly helped him in the last couple of months.  He takes them at lunchtime, in honey (which is good for his allergies) – and Cyda and Skully lick the spoon clean!

He hasn’t had an infection on his skin for quite some time now, so paws – and everything else crossed, unless he gets a sudden urge to scratch, and breaks the skin, he’s doing well.  His fur is growing again, although he is still bare underneath – I guess that might never grow back, but he’s looking great!  He still gets sore ears occasionally, but at least we have been able to stop using antibiotic drops twice a day for weeks! 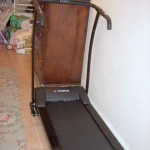 I took him to see his favourite Vet Andrew a few days ago, to have his nails trimmed and Andrew commented on how well he is looking.  I would normally trim nails myself, but fin’s are soft and bleed easily.  I don’t want him to have any excuse to pick up an infection, and apart from that, if he does bleed, I’d rather it was on Andrew’s table rather than for him to stamp it on my carpet, with Fin keeping just one step ahead of me!

He’s feeling better in himself too, particularly after he has been on the treadmill, which he now does off-lead (must get a video of that!)