Under the guidance of Kim, from the Dogmum Bakery I have recently started feeding my dogs raw. They certainly enjoy it and finish their meal in a couple of minutes, whereas Honey used to take half an hour or more, picking one biscuit out of the bowl and taking it to her bed to eat!

Heronbank’s consultant canine nutritionist, Kim, has turned canine nutrition into her life’s work, so I asked her to write a series of articles for me. Very kindly, she agreed. Kimmi is happy to give advice on canine nutrition and behaviour, and will be pleased to hear from you if you have a problem.

Okay, so after the first article, you’re on board with feeding meat (and fish) now, right? So why raw, and not cooked? Well put simply, how many ovens do you see in the wild? Humans have evolved into needing our meat cooked through millennia of food preparation and clever culinary expertise, dogs haven’t. They are simple (but very lovely) animals. There are no Jamie Olivers in the canine world, and there certainly are no Heston Blumenthals either.
As such they still can break down raw meat, and their stomachs are much stronger than ours. Ever wonder how the dog can pick something manky out of a bin, eat it and not be ill? Well their stomach acid breaks down the bacteria much faster and better. If you are worried about bacteria, then freeze the meat when you buy it (I would recommend that anyway, as I would suggest buying in bulk, I have a freezer just for my dogs!) and thaw it before you feed it to the dog. The freezing will kill the bacteria in much the same way as cooking does, but you won’t be breaking down the proteins in the meat like you would in cooking.

By giving the dogs the meats raw, you are giving them all the proteins, all the nutrients and all the fats (yes dogs need fat! – and they need much more fat than humans!) and they get all the benefits. If you cook this, all of these vital things are broken down. 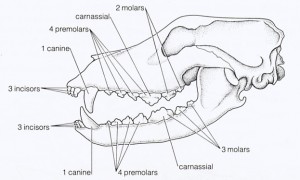 We’ve already discussed dogs teeth, so we know that they can tear through the uncooked flesh easily, and this, for dogs, is the most natural form of eating meat. Once cooked, the texture changes and the need to grind starts to come into play. Think about when you eat a cooked piece of chicken or steak, you use your front teeth to “rip” and then chew using your back (flat) teeth – if like me you like your steak rare, you spend less time chewing it than you would with a well-done steak. This is because the structure of the meat has not been altered as much through the cooking process making it so that its texture is easier to rip with the teeth and doesn’t require as much grinding.

Another reason you shouldn’t cook is that the nutrients of food are always worked out for raw weight, and as you cook out a bunch of the nutrients and the weight decreases in cooking, you cannot track the nutritional value as well.
Plus it is important to feed dogs based on percentages of their body weights, and if you’re cooking the meat, you actually need to feed them more, which just costs you extra!

Going back to “nutrients” I’m sure you’re thinking that’s just a buzz word, can I be more specific so you understand just how different it is between the meat in raw and cooked states. Well the first one is iron. Uncooked meat obviously has blood in it still, and the blood is an excellent source of iron. If you cook the meat, the iron will still be there of course, but much much less of it.

Do you really want to cook it and make some of those redundant? If you do, you will need to increase the amount you feed to give them these, or fortify their food with additional minerals and vitamins (and anything that is fortified, in my opinion, is an admission that the food on its own just isn’t up to scratch!)

When you cook meat you also “melt” the fat in the meat, and whilst that’s great news for you if you’re on a diet, it’s not great for the dog. Dogs need a higher fat amount in their diet than humans. They break it down better and get from it the nutritional necessities that are omega 3 and omega 6 fatty acids. If there is no fat in the dog’s diet, they cannot get these, and their skin and fur suffer greatly.

So to recap: Dogs need it raw – their biology tells us this, as does evolution. Until you see an oven in the wild, with a wolf or wild dog behind it conducting their own cookery show, keep feeding raw! (And ignore the internet pictures of dogs in cute chef hats – sadly I have discovered to my detriment, dogs can’t be trusted to bake!)

Coming Up
Part 3: Why I distrust generic dog food, and you should too
Part 4: The relationship between canine behaviour and nutrition
Part 5: What I feed my dogs and how to feed
Part 6: How to source the food to make the most of your money
Part 7: A list of great foods and a sample meal.