This describes a condition in which puppies are apparently normal at birth but fail to grow and die up to three weeks later.  This occurs despite the fact that the bitch appears to be healthy, to have a plentiful supply of milk and is mothering them satisfactorily.

Pre-weaning losses in dogs can be up to a third.  This includes stillborn puppies.  Fifty percent of losses can be in the first seven days of life.

Why do puppies fade in this way? 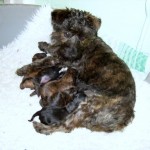 Puppies are very immature when they are born, e.g. neither sight nor hearing is developed. They cannot regulate their own body temperature and have very poor mechanisms to regulate both fluid and energy balance.  They also have no disease resistance and this lasts for several weeks after birth.  For resistance to disease they rely solely on the immunity conferred on them from the bitch. This so-called passive or maternal immunity is conferred on to the puppy initially in the womb by the bitch, via the bloodstream but the majority is acquired from the colostrum during early suckling.

What signs does a fading puppy show?

Due to their immaturity neonatal puppies have only a very limited number of ways in which they can respond to illness.  These are at best vague.  Puppies likely to ‘fade’ usually:

What are the causes?

There are many possible causes:

Some of these causes are interrelated, e.g. a lack of mothering instinct in the bitch coupled with poor environmental hygiene can often result in neonatal septicaemia and death in a very short time.

The puppy may lack passive immunity due to lack of essential colostrum.  In these cases the puppy is more vulnerable.

Common canine bacteria can result in overwhelming septicaemia and death in a very short time in a neonatal puppy.  Due to the limited means of response there are usually few clinical signs observed.

Viruses can play a part.  Canine adenovirus, (canine hepatitis), canine distemper virus and canine parvovirus were all responsible for loss of neonates before their widespread control by vaccination.

Today Canine herpes virus (CHV) is an important virus involved with fading puppy syndrome.  Adult dogs may be carriers but show no signs.  A bitch may acquire infection from the sire (dog) at the time of mating or be previously infected and subsequently pass the virus to the unborn litter, some or all of which may fade subsequent to birth.  Today a licensed vaccine, Eurican Herpes 205, is available.  One injection is given at the time of oestrus (season) or up to 7-10 days after the presumed date of mating, and a second injection 1-2 weeks before whelping.  Unfortunately this does not give the bitch protection in respect of future litters and the vaccination has to be repeated at each mating.  It has proved extremely useful in those cases where canine herpes virus is known to be responsible for the fading puppy syndrome.

What can I do if I think I have a problem with fading puppies?

If you act very quickly, there may be a chance to save the puppy – please do not hesitate to contact me should you need help.