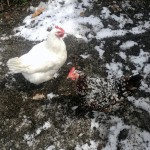 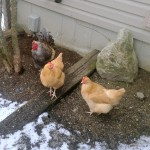 Last year, about this time we visited out friends Wayne and Therese in Savoy, Mass. USA.

Therese had nearly 2 dozen assorted hens, including 4 cockerels.  They are divided into 4 “family Groups”, each with their own male.

At night they were housed on a barn behind the garage, again divided into 4, each with a roosting area and laying boxes.

They went into the barn at sunset and Wayne had access to the barn via the garage, without going out in the bad weather – a big advantage in the cold winters! 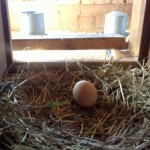 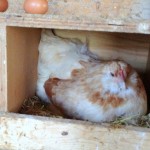 When we were there, Wayne and Therese were getting around 8 eggs a day. This is approximately equivalent to one egg alternate days per hen, a rate which will increase as the daylight hours lengthen.

The eggs were of different colours, depending on the breed of the hen, including an olive coloured egg from an Americana cross hen.  Some eggs were very dark brown and speckled, some plain brown, some white and some pale turquoise. Then there were the tiny bantam eggs, all white. 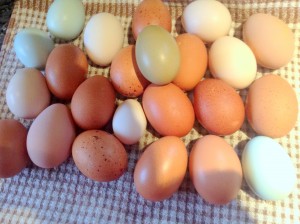 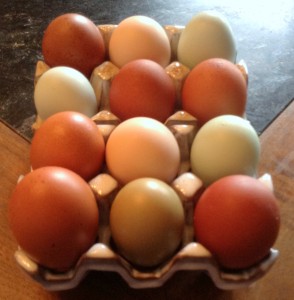 I must admit that the eggs were delicious.

I was videoing the chickens, when Spidey, the doberman came up behind me – he wanted me to throw his ball!!

He is just so jealous!!