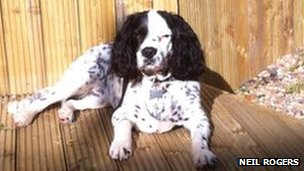 Four dogs have suffered “toxic poisoning” after eating cannabis during walks with their owners near a Greater Manchester reservoir. Neil Rogers said his dog fell ill after eating something on a path near Dove Stone Reservoir, Saddleworth. “Patch was just totally out of it,” Mr Rogers said. Vets who treated the seriously ill dogs said they had made full recoveries.

Police have warned owners to report suspicious packages. Mr Rogers said: “When I got home he just collapsed and couldn’t do anything, I realised he had eaten something.” He said the dog had been eating something which looked like “fat seed balls you hang out in the garden for the birds”. He added that he had taken his dog to the vet, who treated Patch for “toxic poisoning” as they didn’t know exactly what they were treating him for at the time”.

Following the treatment, Mr Rogers returned to the area to collect some of the substance and took it to police. It was later confirmed to be cannabis.

Veterinary surgeon Lorna Cook, who treated two of the dogs, said: “I haven’t seen anything like this before. “We had two dogs with similar signs in quick succession so we knew there was something suspicious. Both dogs collapsed and had dilated pupils,” she said. She said anyone who sees their dog ingest something unusual should contact a vet immediately. She added that the cannabis would “hopefully not” cause long-term damage to the dogs’ health and that they should be “back to normal now the drug is out of their system”.

A spokeswoman for the canine charity Dogs Trust said cannabis was “poisonous to dogs”, even in small amounts which would have little effect on humans.

Greater Manchester Police said people should exercise caution while walking their dogs in the area near the reservoir and report any suspicious packages.

Too close for comfort!