Cyda has a Luxating Patella 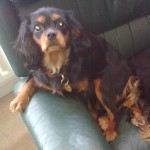 When Cyda was pregnant we noticed that she was having a problem with her hind legs, the right one in particular.  She would give a little yelp, hold the leg out stiffly for a few seconds, then she was ok again.  It never stopped her chasing around, but was obviously becoming a problem to her.

We immediately consulted Andrew at Donaldson & Partners, who confirmed what I had been thinking.  Cyda had a Luxating Patella.

Since the birth of her puppies she has not been troubled with it, but these things rarely improve on their own, so we referred her to Donaldson & Partners again, and surgery is planned for 19th April.  Andrew thinks that Cyda only needs to have the right knee done and with exercise and supportive therapy she should be ok.