Cavaliers Help Themselves to Anti-biotics!!!

We were catching up on a bit of shut-eye and never heard the phone ring.  When we got up 2 hours later we found a text message from Jemima, who had been web-cam watching, saying:

Think someone is eating something they shouldn’t on the webcam…  Looks like little capsules, red and blue.

Sure enough when we looked on the floor there were bits of chewed-up cardboard and a few capsules with teeth marks in them!  That’ll be Fin, I announced confidently.

No, it wasn’t Fin, he was tucked up in bed.  It was a naughty black and tan. 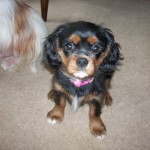 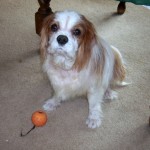 We rang and spoke to the vet.  We agreed that any or all the dogs could have participated in the pill party, but a few anti-biotics were unlikely to be life-threatening.

Worst case scenario could be a bit of diarrhoea – but we can deal with that.

Also if they had eaten a lot of tablets it could affect their kidneys.

We decided on a treatment for all the dogs. 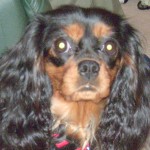 Charcoal to absorb any undigested tablets, and lots to drink, – water with a dash of milk to make it tasty.

I also have a herbal kidney enhancer so I put a dose in the drink.  “It wouldn’t hurt” said our vet.

So we’ve covered all the bases and are not expecting any problems.

More than likely they got a taste of the capsules and thought “Yuk” and went back to eating the packet!

How did they get them?  They were on a shelf out of reach – so we thought.

Next time they go in a drawer!