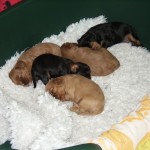 Cavalier King Charles Spaniel Puppies at three and a half weeks old.

Cyda’s puppies are starting to make little woofie-noises.  They are starting to play with each other and stomp around their bed demanding that mum feeds them.  They have also begun venturing out of their bed to eat on their own – making a terrible mess in the process!  It’s all part of growing up.

They’re still spending a good deal of their time sleeping.  Dreaming of … well, what is it that puppies dream of?  They don’t have an awful lot of Life Experience to draw on at the moment.  Romping with their litter-mates I wouldn’t wonder.

Regular viewers will notice that we have moved their bed further away from the camera.  This is in preparation for when they become more active and venture out of their bed for longer.  It won’t be long now …