Many people think that cats can “fend for themselves” whilst they are on holiday, or when they move house, or when the economic climate makes things a little tight.  It is true that cats are more independent than dogs, but if left on the streets they will either become feral or starve to death, often producing litter after litter of kittens and fighting amongst themselves.  Occasionally we will help a needy cat, like Smudge, who came to us via Katie, starving and looking very pregnant.  After an initial period of running away, food soon brought her closer and within a couple of weeks Katie had turned her around into a very friendly cat.  The plan was that Smudge would stay at Heronbank until her kittens were born and weaned, then she would be spayed and we would then require good homes for her and her kittens. Initially she took up residence in our store room upstairs, where she loved to curl up on a chair. Here’s a video of Smudge, the day after she came to us, and the first time she met John. 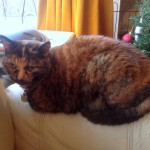 Subsequently it was confirmed by our vet that Smudge was (thankfully) not pregnant and it was malnourishment which made her look pregnant.  Her backbone can no longer be felt and she has turned into quite a cushion, and been adopted into the Heronbank “family”, under her new name of Tiffany.