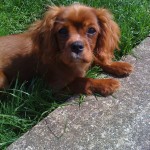 I was told about a harmless yet effective way of preventing persistent barking by Ted (Cyda‘s brother)’s owner Penny.

Ted had been nervously barking at other dogs pretty well since Penny has had him, despite constant attempts to socialise him.

He would always bark first and ask questions afterwards!

Penny excitedly told me of the New, Reformed Ted, who will now approach other dogs without barking and actually play with them!!!

What has made the dramatic transformation? 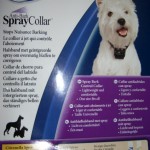 A Citronella Spray Collar.  The collar is battery-operated and uses a re-fillable Citronella spray.

I was so impressed with Penny’s enthusiasm that I decided to buy one for Cyda.  She can be silly, barking at Sooty in his pen and at anyone who walks past.  It arrived today!

It took me a while to master the technique of putting it together, (the microphone goes on the INSIDE of the collar!) but having sorted that, we tried it. 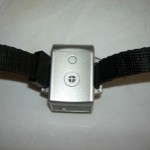 We began by taking Cyda to Sooty‘s pen where we knew she would react.  She did not disappoint, and shhhh a small jet of Citronella was released and the barking stopped immediately.

We took her indoors and then out a few minutes later, and shhhh the barking stopped. Magic!

Then someone walked past, and shhhh silence very quickly followed.

I can certainly endorse Penny’s opinion of the Citronella Collar.  They are worth their price.