Our rescued Cavalier, Fin, had multiple allergies. He was the worst case that our vet had seen!  I have opened this page so that owners of dogs with allergies can share their experiences and things which have worked for them. 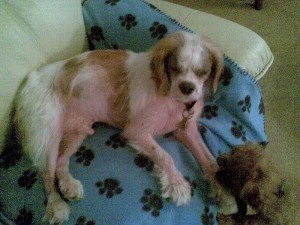 Food intolerance may be the underlying cause of many of the health problems in animals. We have found this in Fin who was allergic to many and various stimuli.  Adverse reactions to ingredients in the diet may well be one of the most common but least recognised causes of ill-health both in pets and humans. In theory, any dietary ingredient can cause an intolerance. In practice, protein (e.g. beef, lamb) dairy (e.g. milk) or carbohydrate (e.g. wheat, rice) sources are the most likely causes although chemical additives such as food colourings, yeast and preservatives can cause a reaction. All the above applied to Fin, resulting in inflammation and sensitivity of the skin, constant ear and eye infections, and loss of nearly all his fur.

Understanding and recognising dietary intolerance is not helped by pet food legislation which allows pet food manufacturers to declare ingredients such as “animal derivatives and cereals” rather than naming the actual ingredients. This means that you cannot know precisely what you are feeding and the ingredients can be changed at will, without notice. 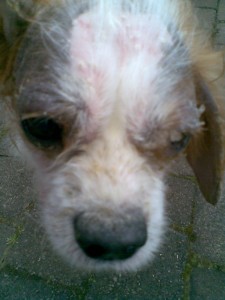 In general, adverse reactions to food can be divided into those which act through the immune system (allergy) and those which do not (intolerance). Although the mechanisms of the two are different, the symptoms are indistinguishable. Signs of intolerance (symptoms) vary widely and are not well understood or documented. A reaction can be instantaneous or delayed, even for several days. It can be mild and ill-defined causing signs of ill-health such as lethargy, loss of appetite, abdominal pain, stiffness, failure to thrive, unpleasant body odours, bad breath, discharge from orifices and so on.

An anaphylactic reaction can cause shock and death. In theory, any organ or system can be affected and this can give rise to a wide range of symptoms. In pets, dietary intolerance most commonly affects the skin or digestive system causing disease/disorders related to these organs. This might be eczema, itchy skin, dermatitis, otitis (ear inflammation), vomiting, diarrhoea, colitis, gastroenteritis, pancreatitis, hepatitis, abdominal discomfort etc.

Other organ systems can also be affected e.g. immune system, musculo-skeletal system, nervous system, endocrine (hormonal) system. Any symptom or disease affecting any of these organ systems could be caused by a dietary intolerance. This would include arthritis, convulsions (epilepsy), abnormal behaviour, allergic (pollen, house dust mite) and inflammatory reactions (pancreatitis, hepatitis), susceptibility to infection etc. Long-term unrecognised dietary intolerance may be the underlying cause of degenerative diseases such as heart or kidney failure and cancer. It is probable that dietary intolerance is much more prevalent than pet owners and veterinary surgeons realise. 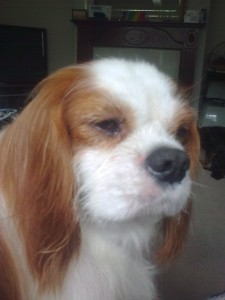 Fin at his best!

Any symptom of ill-health which persist despite treatment or which recurs after treatment should arouse suspicion of food intolerance. A feeding (elimination) trial is a reliable method of diagnosis. This involves eliminating the existing food from the diet and replacing it with a food which is new to the animal.  If symptoms improve when the suspect food is eliminated then it can be presumed that a dietary intolerance was responsible. Confirmation would require the reintroduction of the suspect food to see if the symptoms recur but, of course most pet-owners will be understandably reluctant to take that step.  Disorders of the digestive system which are due to dietary intolerance often disappear within a few days of eliminating the food which is responsible but most disorders will take 3-4 weeks to respond to removal of the offending food.

Most cases of dietary intolerance (those where the immune system is not involved) are dose-sensitive. This means that the amount of food can determine whether or not signs of intolerance will disappear. This is why it is important that whatever food is given, it should be fed sparingly. Overfeeding can make the symptoms worse.

Because Fin had to be on such a restricted diet – ie removing beef, lamb and chicken, egg and maize from his diet, he became very food orientated, and would steal anything, from the other dogs dinners (I had to feed him separately) to a sandwich at a local picnic, to a dead blackbird left in our garden by local cats. He did get very overweight, which was entirely my fault. I felt sorry for him having so little, but I now realise I was doing him no favours, so he went on a restricted quantity of food.

Because he is allergic to things outside like grass seed, we stopped walking him on grass, but fortunately our back garden is paved. We also have a treadmill so he can be exercised. Here is a video of him learning the treadmill before he lost some weight.

As he is also allergic to house dust mites, he could not go on carpets and soft furnishings. This was hard for me, as I liked to have my dogs around me, under my desk when I was working and on my knee during the evenings when we were relaxing. However our kitchen and dog room are tiled, so it is relatively easy to damp mop to remove any dust or dirt. The dogs  accepted that they couldn’t come through to my study or the lounge in the evenings and seem to be happy to go out in the back garden or lie in their beds instead..

His allergy to storage mites meant that the dogs’ kibble had to be kept in an airtight container and frozen for 24 hours in a smaller container before use. However, under the guidance of a friend, we switched to raw feeding. I found this easier to give as we knew exactly what was going into it.

I hope you have found this page helpful, and I invite you to add your comments or questions below.